Our obsession with Stationery. 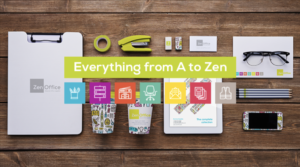 Many people are stationery enthusiasts, but where does this obsession with seemingly mundane—and even technologically obsolete—objects come from?

Many people, it seems, have intense relationships with their stationery. Boutique office supplies shops have colonised every shopping centre in our high streets, and some people will spend nearly £50 for a leather-bound, brand name notebook.

So where does this obsession come from?

James Ward, the author of Adventures in Stationery, believes it’s all about a deep psychological longing for order.

‘There is definitely that thing of the new school term and when you go back to school with your pristine pencil case, which lasts half an hour or so before the first pencil gets snapped or your rubber gets all chewed up,’ he says. ‘But there is this very brief window of pristine order.’

Ward, whose I Like Boring Things blog focuses on everyday objects from advent calendars to pre-wrapped sandwiches, believes that in many ways the story of stationery is the story of human progress.

There’s certainly a lot of technology in your pencil case; some of it conceived of in moments of inspiration, the rest stumbled upon in the most unlikely manner.

‘It’s barely changed in the 60 years since it was first developed. It’s just this beautiful example of what great design should be, because it works well and it looks nice. That’s why they’ve got one in the Museum of Modern Art in New York.’

The story of the Post-it Note however, is the complete opposite. American chemist Spence Silver was working for 3M’s adhesives division on a project to create a very strong glue. Luckily for organised people everywhere, he got the formula slightly wrong and instead created an extremely weak glue.

That might have come to nothing, though, if it weren’t for his colleague Art Fry. Fry sung in a choir in his spare time and often used loose bits of paper to mark pages in his hymn book, an unwieldy system plagued by falling bookmarks.

‘If only there was some sort of weak glue I could use,’ thought Fry, and the Post-it Note was born.

Then there’s the glue stick, invented in 1967. ‘Legend has it that there was a guy called Wolfgang Dierichs who was boarding a plane and while he was on the plane he had this breakthrough, this incredible moment of discovery,’ says Ward. ‘He was watching a woman applying lipstick and he saw the lipstick and thought that form could have a different use if you replaced the lipstick with a stick of solid glue.’

Fast forward nearly 40 years and enough Pritt Sticks (the original glue stick) have been sold to leave a trail of adhesive from Earth to Mars and back.

When pens were invented in the 19th century, quill enthusiasts were aghast. Author Victor Hugo refused to use one.

‘The steel pen is the true root of all evil from which society as a whole is suffering in our time,’ wrote French writer and critic Jules Janin. ‘One needs to compare the steel pen that one uses nowadays with the good old quill that well served our venerable ancestors. This modern invention, makes an unpleasant impression upon us. It is as though one fell in love against one’s will with a little, hardly visible dagger dipped in poison.’

Now stationery itself may be under threat from the march of digital technology. Can pens, pencils and paper survive in the internet age? James Ward sure thinks so, and has a theory that might explain those expensive journals and the desire for stationery.

‘As old technology gets replaced, the flaws in that technology become the charm of it,’ he says. ‘Now that we have electric lighting, if you eat dinner by candlelight you think it’s nice and romantic. But in the days you only had candlelight you were thinking, “This is a bit gloomy, I can’t really see my dinner.”

‘It’s the same with vinyl. People talk about the pop and crackle of vinyl as being the warmth of it, but before we had these digital alternatives you were thinking, “Oh, I have to get up and turn it over again.”

So what about our Office Stationery?

There’s still a huge demand for stationery and office products amongst our office technology. Many people have different learning styles and working techniques. Highlighting areas of importance in documents for example, can help people understand and engage with information better than on screens.

Likewise, reading and handwriting physical documents can help to improve the quality of the piece through directly connecting with it. It’s in our nature to do so, and, who doesn’t love a funny note on a ‘Post-it’ around the office!