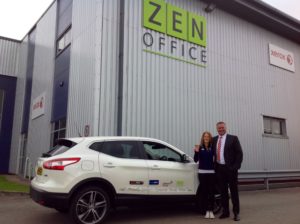 The British Olympic Association has named the men’s and women’s hockey squads who will compete for Team GB at the Rio 2016 Olympic Games. Amongst players selected is Oldham-born Nicola White.

ZenOffice has financially supported Nicola’s ‘Road to Rio’ for the last two years. The sponsorship deal was agreed in 2014 after ZenOffice CEO Les Kerr met Nicola at a local networking event in Oldham.

“When we found out that Nicola was looking for help to be able to lease and insure her car I was delighted to be able to step in and offer our assistance,” says Kerr. ”I’d originally met Nicola at Oldham Athletic Football Club and was deeply impressed with her passion and commitment to become one of the world’s best hockey players – not just to her sport but also to our community”.

“We believe strongly in supporting talented local individuals to achieve success, and the whole team at ZenOffice is delighted about the news. In only two years we’ve witnessed numerous accomplishments in Nicola’s sporting career, and now she has become one of the most experienced members of the Great British Ladies 2016 Olympic Hockey Team.’

‘It’s also great to know that in our own little way ZenOffice will be represented at the Rio Olympics.”