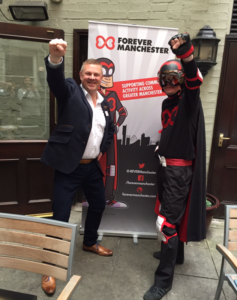 ZenOffice is delighted to announce that they are the brand-new sponsor of Captain Manchester. Zen have supported the charity Forever Manchester for the last three years and felt the time was right to enhance their partnership.

Bruce Davie, ZenOffice Managing Director says, “Having supported Forever Manchester for the last three years as a corporate partner, Zen wanted to get more involved and make a bigger commitment to supporting local communities. We believe there is a synergy between our brands and a commitment to working across Greater Manchester. We also believe that Captain Manchester captures the spirit of Greater Manchester. He’s a local hero who represents people who have that great attitude, who care about what goes on around them and want to make a difference and these values reflect those of ZenOffice.”